Released as a numbered & signed limited edition of 250 bronze castings

While they may look like lizards, tuatara are actually the only surviving members of a unique group called Sphenodontia (from Greek - meaning wedge tooth) that roamed the earth during the age of the dinosaurs about 200 million years ago. All of the other species in the group, apart from the tuatara, became extinct about 60 million years ago. Tuatara are therefore of huge international interest for their value in teaching us about ancient life forms. The tuatara was one of New Zealand's first native species to be fully protected by law in 1895.
When this limited edition sculpture of the tuatara in bronze was first launched, early sales were used to raise funds for tuatara conservation, via the World Wildlife Fund. As a result, there is now a thriving colony of tuatara on Tiritiri Matangi Island near Auckland, where visitors may be lucky enough to see them in the wild. 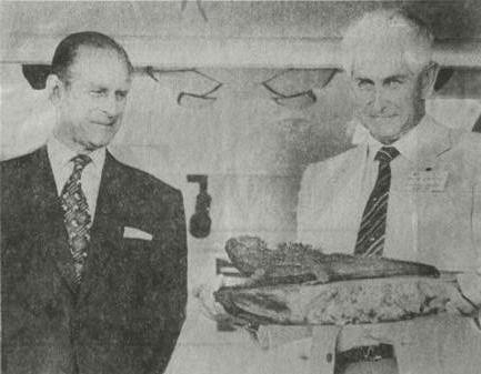 HRH Prince Philip was presented with #1 of the Tuatara edition
as International President of the World Wildlife Fund.
The Tuatara bronze has become a firm favourite for our collectors. Of the original 250 castings in the limited edition, over 175 have been sold so there are now fewer than 75 remaining.
Edition limited to 250 numbered and signed bronze castings
Dimensions: approximately 510mm x 230mm x 100mm (20" x 9" x 4")
Price: $NZ 3,500
Phone: 09 420 3308
International calls: +64 9 420 3308
Email: This email address is being protected from spambots. You need JavaScript enabled to view it.